Gillian Steele, 2021 recipient of the John B. Holdstock Scholarship

SILT is part of the coalition of non-profits involved in awarding the John Holdstock Scholarship annually, and this year’s recipient is Gillian Steele.

Angling and a love for British Columbia’s fish species has always been a passion for Gillian. Since birth, Gillian learned to appreciate and respect the natural resources of British Columbia. “My father introduced me to angling,” she explains, “and I have followed him along riverbanks since I could walk.
“Having now worked in the recreational sport fishing industry for many years, I have witnessed first-hand the changes, [the] mismanagement of fish and wildlife, and the toll our ever-expanding urban footprint is having on the environment. Angling and my experiences in the outdoors have shaped who I am as a person thus I will do everything in my power to solidify their continued existence in the future.”

Gillian is currently a Director of the Steelhead Society of British Columbia (SSBC), whose mandate is conserving wild steelhead and wild rivers in BC. The SSBC raises money to assist in funding projects directly related to wild steelhead management as well as to raise awareness of the continuing issues surrounding wild steelhead throughout the province. Says Gillian about the work, “I have been on the board of directors since 2014 and joined as a means to give back to a particular fishery that means so much to [me].” She goes on to explain, “one of the SSBC’s main focuses is the Thompson River and their remarkably unique population of summer run steelhead.

“It is situations and ongoing fights for the protection of species just like these that keep me involved but longing to do more. As an angler engulfed in the recreational angling industry, I feel it to be my own responsibility to make sure these opportunities are around for my children’s children.” With this, it seems elementary that Gillian would seek formal education in Fish, Wildlife, and Recreation discipline. “The intense and comprehensive program has been challenging but has opened my eyes to the complexity of natural resource management. My main goal after the completion of my education and into the professional world is to work toward preserving wild steelhead in British Columbia. Steelhead are my passion, have a special place in my heart, and are the fundamental driving force in my future aspirations.”

Well, thank you for your dedication to make British Columbia’s natural environment a rich and thriving one for generations to come, Gillian. Congratulations and good luck in your studies! 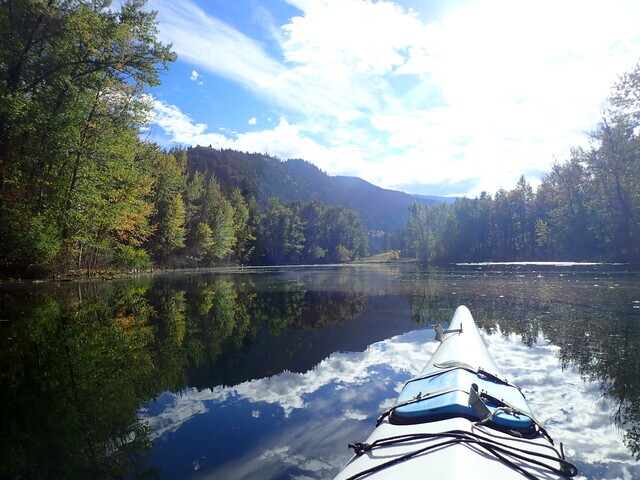 Learn to protect your lake

Trained crews from the Southern Interior Land Trust will be conducting shoreline assessments on Tuc-el-nuit Lake in June as part of the ongoing Love Your Lake program, aiming to help lakeside property owners learn how to protect water health and quality.
Read the full story on Castanet

After nearly a decade on the board of the Southern Interior Land Trust, most recently as vice-president, avid conservationist Rick Simpson of Kelowna passed away Feb. 2 of cancer.
For health reasons, he had resigned from the board last year.

Rick had a particular interest in conservation of habitat for fish and had devoted his spare time and his energy for more than four decades in various areas of the province, and provincially, to helping to improve survival rates for spawning salmon and kokanee.

At the same time, he focussed on mentoring and educating young people so there would be passionate new anglers to appreciate the natural world and work to follow in his footsteps.
He also volunteered with fish and game clubs, the B.C. Wildlife Federation, Fishing Forever, the regional environmental advisory commission, and was on the Okanagan Salmon Community Initiative, part of an Okanagan Nation Alliance project to re-introduce salmon to the Okanagan. He was outspoken on environmental issues in his community.

Networking and promoting collaboration between different sectors of a community was a mantra of his, and he involved all sectors of the community, from industry to civic authorities to volunteers and the general public in habitat conservation causes.

Rick will be greatly missed, and the board and members of the Southern Interior Land Trust express our sadness and condolences to the Simpson family. He is survived by his partner of over 15 years Gael Russell, his son Richard Kemp Simpson, his daughter Kelly Suzanne Simpson, the mother of his children Grace Bartel, his brother Jeffery Simpson and his sister Victoria Nuttall.